I can only find two words to best describe Pirate’s Booty. Fucking delicious. These fluffy little shits are almost impossible to put down.

I know what you are saying “This is a tech site, not a food blog”, and you would be correct. But you still gotta feed the machine. What better way is there than endlessly stuffing empty calories down your throat? This is what the Epic Snack Review is all about. OK? We good to go? Alright, lets get to it!

The obvious comparison is, naturally, puffy Cheetos. They have the same basic shape, the texture is very similar, but the taste certainly is not. The flavor can be described as the love child of Kix cereal, popcorn, cheddar cheese, and Cheetos. But it is a far cry from the artificial cheese flavoring of Cheetos (nothing against Cheetos). They are a bit lighter than Cheetos, with slightly less crispness and crunch. But their texture is still pleasant.

After stuffing your face for awhile you will develop cheese fingers of course. But instead of dying your fucking finger tips orange, Pirate’s Booty leaves an easy to clean cheese residue. Kind of like dipping your fingers in grated Parmesan cheese. 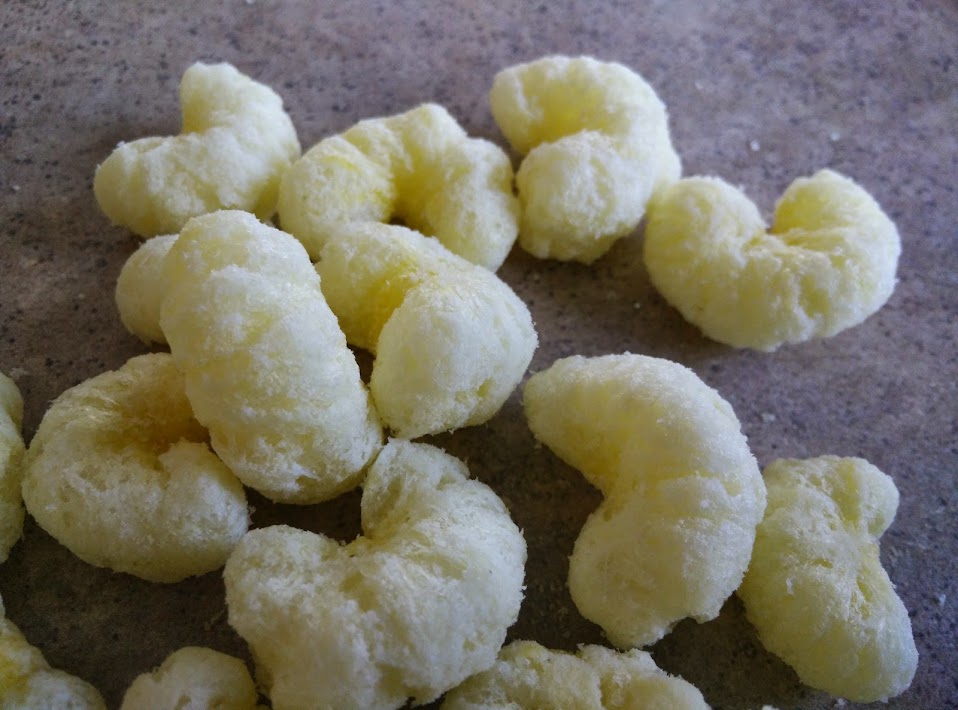 Epic Snack review is not all that concerned with nutrition, that’s not the point. But excluding alcohol, everything is better in moderation. I wouldn’t say that either snack food is “good for you”, not many salty/cheesy snack foods usually are. But I can say that Pirate’s Booty does seem to be a bit healthier in comparison to Cheetos Puff’s ¯\_(ツ)_/¯. I am no dietitian, so please consult your doctor before beginning a Pirate’s Booty regimen.

Cheetos has double the fat (10g vs 5g) and sodium (300mg vs 140mg) per serving. These things are usually considered bad for you. Cheetos also gets the nod on calories per serving, 150 vs 130. But if you are counting your carbs (don’t we all) neither can be considered a “low carb snack food”. They both pack over 13g carbs per serving. Cheetos 13g and Pirate’s Booty 19g. Oh yeah, they are also gluten free. So that’s good right? Isn’t gluten is like the new MSG?

Nutrition bullshit aside, are they any fucking good? That’s probably the reason you clicked on this post. As I stated before, I will reiterate. I am happy to confirm that Pirate’s Booty are indeed fucking delicious. That’s all there is to it. If you like Cheetos and/or cheesy popcorn, you will probably love the Booty.

I have only had the aged white cheddar variety, but they do have other flavors available. According to their website they have a total of 5 flavors available. Veggie (meh), Sour Cream and Onion (always a tasty flavor), Fruity Booty (sounds disgusting but intriguing), Aged White Cheddar Regular and Crunchy Treasures (looks like normal Pirate’s Booty but in “fun shapes” if your’e into that kind of shit).

Their availability seems to be limited to specialty grocery stores, like Whole Foods, and wholesale stores such as Costco. You can also pick them up at Amazon. Their price is equal to your normal everyday snack food. In my opinion, the price is just right, but will vary based on your location.

I usually grab the big ass bags I find at Costco, that will usually last us for a couple of weeks at least. My Costco only sells the white cheddar variety, but you could get lucky at yours. I’d love to hear your opinions concerning any of the other flavors, so let me hear it in the comments section.