Now that we FINALLY have our HTPC assembled and ready to go! It’s time to see if this damn thing actually works. So let’s connect the son of a bitch to our 4K source and fire this bad boy up!

ETR How to Build a 4K HTPC

Not so fast my friend! There are some things I think you should know before you go turning on your brand new HTPC for the first time, especially if you plan on connecting it directly to a 4K TV. If you are an inexperienced PC builder, or you don’t feel like troubleshooting, I recommend you keep reading before you connect your HTPC to your 4K source.

Trying to Avoid the WTF?

This was my first 4K PC set up. I expected it to go smoothly, but there were a few things I didn’t see coming. These issues may have been isolated to my particular build and setup, but there is always the possibility you run into issues of your own. To save you the frustration of figuring this out on your own, I will fill you in on my experience.

The goal is to avoid most of those “what just happened”, or “what the hell is wrong” moments. Once again, it might have been my particular TV, or HTPC hardware that caused the following issues. But were going to eliminate the 4K TV/monitor from the “picture”. Limit our variables, that way if any issues occur up during the setup process we can’t go blaming the 4K TV/monitor or its high resolution. I recommend you do your setup, and OS installation, on a standard 1080P, or whatever resolution, TV or computer monitor.

I know you cannot wait to see your new Ultra HD TV light up with the Windows logo for the first time, but you might want to put that off for just a few more minutes.

I set up my HTPC on my Vizio P Series 4K TV. This did not make for the smoothest installation. So what went wrong? First of all, BIOS setup. The first thing you’ll want to do when setting up a brand new PC is modifying your BIOS settings to fit your needs. Most of the time, you will want to do this before you install your OS. This led me to my biggest WTF! moment of my build, and one of the main reasons I suggest you do your setup on a lower resolution monitor. For whatever reasons, the BIOS screen would not appear on my TV. I tried everything I could to fix it. Switched HDMI ports, switched cables, booting directly into BIOS via MSI’s utility, resetting CMOS. Nothing worked! When I tried to get into the BIOS it glitched out like I had a bad GPU or something. What the hell, right? I don’t even have a GPU installed on my machine. I was semi-frustrated if you cannot tell.

At this point, I had already bypassed tinkering with my BIOS and finished setting up Windows (more on that later). Windows was displaying properly (after initial setup), 4K looked great, everything was great. But I still could not access BIOS. I tried installing the latest motherboard drivers, no help. Every time I tried to boot into BIOS, I knew it was taking me in there, but I couldn’t see anything on the TV. It literally looked like a glitch, a bunch of green, sometimes red, horizontal lines on a black screen.

Rendering of what I saw every time I expected to see the BIOS screen. It would go away after Windows was loaded.

After a bunch of troubleshooting, and finding no answers online, so I just said “too hell with it”, maybe it’s my glorious 4K TV that is causing the problem. So I removed the HTPC from my cabinet and brought it over to where my desktop is set up. Plugged it into my standard 1080P monitor via DVI, and voilà. ItwWorks perfectly on the first boot. I couldn’t even see the BIOS splash screen before, but now everything is perfect. After spending days of bashing my head against the wall, apparently, there was nothing wrong with my BIOS, or my PC components whatsoever. Relieved, but disappointed, I finally got to tweak my BIOS settings. At least I didn’t have a faulty PC.

I cannot give you a definitive answer as to what the issue is. It clearly has something to do with the 4K resolution or my HDMI connection. But at least I know the workaround should I need to access BIOS again. I am hoping this is a motherboard driver issue. But the best I can do is hope for an update. I am going to try and see if running through a discrete GPU (rather than onboard Intel 4600 graphics) solves the issue, but until Nvidia or AMD release their HDMI 2.0 low profile GPU’s, I will have to keep on waiting (might be a while). I’ll give an update if I ever resolve this issue.

UPDATE 5/6/2015 For whatever reason, this problem has suddenly disappeared. I assume that either a Windows update, hardware update, or motherboard update finally fixed the issue. But I wouldn’t be surprised if you still experience the above issues during setup, but it’s a relief to know that the problem is finally resolved. Oh well. ¯\_(ツ)_/¯

Before I could completely figure why BIOS was doing what it was doing. I wanted to see if I could install Windows successfully. If I couldn’t install my OS, there were bound to be fairly significant hardware issues. I popped in the Windows 8.1 Pro OEM disc and began my install.

The first thing I noticed was how piss poor everything looked. I remember Windows 3.1 installs looking better than that. The text was extremely large and pixelated, and everything was grayscale, no color. The buttons used to advance were mostly off of the screen. It made setup a major pain in the but. Luckily setup is a fairly linear process (not many options) so I could more or less guess the correct button each time. Windows 8.1 appeared to have installed properly, but it still looked horrible, even after I set up my account. After a couple of minutes, the screen refreshed and everything was in glorious 4K. I imagine Windows pushed an update to its display drivers, but I am not sure why it was so bad right out of the box. It must be a 4K thing because it is something I have never seen before. But as I was saying, once setup was finished and drivers were updated, I was finally able to see what Windows 8.1 was like in all of its 4K glory. It looked awesome, it was crisp, it was bright & colorful, and it was fast. But why was everything so tiny?

What is this? A desktop for ANTS!

If you are building a 4K HTPC, you probably want to be able to view everything from a distance. I don’t have the world’s best eyesight, but you would probably need a set of bionic eyes to do anything on a 60″ 4K TV from a normal viewing distance (8-10 feet), without adjustments made to display scaling. By default, Windows will display everything unscaled (at 100%), so all of your text, icons, and the mouse pointer will be ant sized. This might be OK for a computer monitor your viewing from two to three feet, but for a TV, it’s not so good. Unless you’re Hawkeye, you are probably going to want to adjust your scaling a bit. You can adjust scaling system-wide, so everything is as large as you need it to be.

To adjust Windows 8.1 scaling do the following. To access scaling settings, right-click the Windows desktop background and select “Screen resolution“. Click the “Make text and other items larger or smaller” link in the Screen resolution window. From here you can adjust and fine-tune how you want Windows to scale. You might need to go higher than you think. It might look a bit strange, but remember, you want it to be as functional as possible from your couch or armchair. You don’t want to be forced to get up every time you want to read something.

Windows scaling is far from perfect, however. Some applications will ignore Windows scaling and do their own thing. Origin is a good example. I know. Like you needed another reason to hate Origin. If you are accessing Origin from your HTPC, it might be kind of hard to find your way around, unless you get your ass up off the couch. Some, not all, Windows applications seem to ignore system scaling. I don’t have a good workaround for the ones that don’t scale well, but most do a pretty decent job with scaling.

There are a ton of hardware and peripherals you can get for your HTPC. But there is one in particular that I think that everyone could benefit from.

You are probably going to want to control your HTPC somehow. I have yet to find the perfect “do it all” input device. Air mouse, remote, keyboard, trackpad, Bluetooth, WiFi, infrared combo. The perfect accessory does not seem to exist yet.

The first thing I recommend you purchase (other than a wireless keyboard, mouse, etc.) is a USB3 hub. “But my case already has two USB3 ports in the front?” This is true. But if you try inserting a typical USB dongle for a wireless mouse or keyboard, you are not going to be able to shut the access panel unless you take them out. Plus I intend for those ports to be temporary use, not full-time use USB ports. This is what the rear USB ports are for. So why get a USB hub? Your results may be mixed, but I found that plugging in my wireless keyboard via the rear USB ports to be non-ideal. It dramatically decreases the range, even with an extender. I would constantly lose connection depending on where the keyboard was resting. Using it on my lap was impossible, from only 8-10 feet. So I wanted to eliminate that signal passing through my case and TV, and all the metal/wood & electromagnetic interference in between. 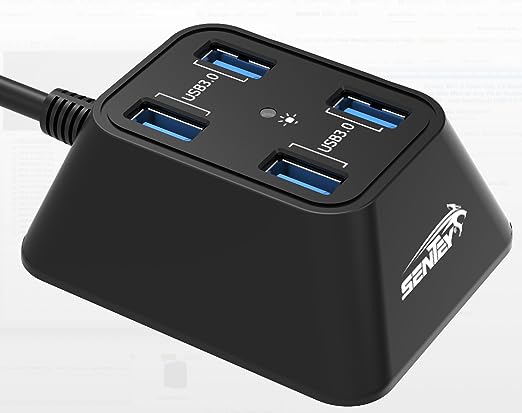 To solve this issue, I picked up this Sentey USB3 Hub, but any USB hub will do, provided it has a long enough cord. This hub not only gains me four extra USB ports but also basically acts like an extension cord. It’s three-foot cord allows me to plug it into the back of the HTPC and route the USB hub to the front of my stand where there is no interference and a direct line of sight connection with the rest of the room. I have my wireless mouse, keyboard/trackpad combo, and mini wireless keyboard all plugged into the hub and everything works perfectly. I highly recommend you give this a shot if you are having range issues.

In part 5, we will take a look at some software and applications you might find useful with your HTPC. Till next time!